Criticism to Erdoğan Goes Deeper than Trees and “Interference with Lifestyles”

Some observers explain the Gezi Park protests and the Turkish government’s harsh clampdown as a new chapter in the conflict between secularists and Islamists. The argument goes that most protestors are well-educated “White Turks” from middle class backgrounds, and their main reason for taking the streets is the government’s increasing interference with their lifestyles, exemplified by the abortion debate and the new law restricting the sale of alcohol. Erdoğan himself has been presenting the events to his followers as a civilian coup attempt backed by foreigners and the “interest-rate lobby.” He has no scruples about voicing inflammatory (and in more than one occasion, false) allegations against the protestors in his party rallies, which he organized hastily as a showdown in the face of protests.


Even while recognizing Erdoğan’s more recent authoritarian and lifestyle-interfering tendencies, most reports and analyses praise him for overthrowing the military tutelage and managing the economy successfully in his ten-year rule. Analysts, by taking Erdoğan’s successes as a given, miss the point of the protests. 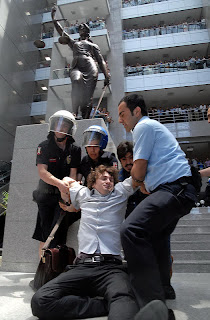 It is important to remember just how Erdoğan overthrew the military tutelage. In the last ten years not only military officers, but also journalists, academics, students and local politicians were sentenced based on charges and evidence that are now widely believed to be fabricated. The absence of due legal process should not be overlooked in some cases and condemned in others, depending on whether the defendant happens to be a high-ranking military officer, nationalist academic, leftist student or Kurdish politician. The partiality of the police force, prosecutors and judges is clearly visible, but supporters of the government look the other way as it serves their political interests. Now that Erdoğan has come up with a new conspiracy theory to explain the protests, the absence of the rule of law may hit anyone and everyone in Turkey. The detentions following the harsh clampdown of 15 June are likely to continue. Government officials have stated that a department within the security forces will be monitoring Twitter.

Against this background it is hard to believe that police officers, who fired rubber bullets and pepper gas canisters at people, causing deaths and vital injuries, and government officials, who gave them orders to do so, will be held to account for their actions. Just as nobody was held to account in cases like the incident in Uludere, the eastern town where 34 villagers were killed by air force bombardment in December 2011. In fact, the police officer, who shot Ethem Sarısülük fatally with a real bullet, was released on 24 June. On 28 June a teenager called Medeni Yıldırım was killed in Lice, Diyarbakir while protesting against the construction of a gendarmerie post. 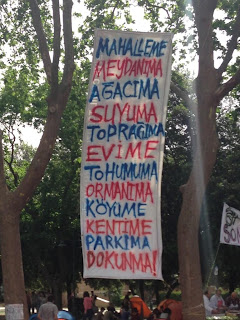 The second assumption that remains unchallenged is that Turkey enjoyed unprecedented economic growth under Erdoğan. Observers take the growth rates at face value and do not question how this growth was achieved, or whether it is sustainable. Instead of undertaking the structural reforms necessary to improve the competitiveness of the economy, Erdoğan’s government picked a growth model based on imports, consumption and construction, the vulnerability of which is now becoming clear with the latest capital reversals. Companies close to the government won the tenders for large infrastructure and gentrification projects. New residential buildings and shopping malls sprung up everywhere in Turkish cities. In the absence of effective supervision of the judiciary and the media, no consideration was given to the effects of these projects on the environment, the city’s cultural heritage and the relocated residents of the gentrified neighbourhoods.

The shopping mall, which the government was planning to build in the space where Gezi Park is located, became the symbol of unbridled capitalism in the eyes of the protestors. The protests were directed at not only this project but many others; including the construction of a third bridge over the Bosphorus, the foundations of which were laid on 29 May, hydropower projects in fertile valleys and the shopping mall that will replace the historic Emek Cinema in the Beyoğlu district. One of the most prominent banners in the park read: “Don’t touch my neighbourhood – square – tree – water – earth – home – seed – forest – village – city – park!”

It is important to add that the indicators used to support the growth story can also be misleading. For instance, the Economist claimed in its 8 June issue that Turkey’s per capita GDP tripled in the past ten years. The magazine then had to publish a correction in its 15 June issue stating that this was only true in nominal terms, and the increase in real terms was just 43%. On average GDP grew by 5% and per capita GDP grew by 3.6% since 2002. Dani Rodrik from Harvard University showed in his blog post dated 20 June that Turkey’s growth performance surpassed that of developed countries, but was not remarkable compared to other emerging markets, which also grew strongly in this period. Moreover, economic growth was accompanied by a large current account deficit. Monetary policies managed to reduce the current account deficit from 10% of GDP in 2011 to 6% in 2012, but GDP growth rate also fell from 8.5% to 2.2%. Another worrying signal is high levels of external debt, which rose from $130 billion in 2002 to $337 billion in 2012.

The concerns of the protestors cannot be explained only with environmentalism or the government’s interference with lifestyles. The government may try to present the events in the framework of the old secularists vs. Islamists dichotomy, but what seems like Erdoğan’s successes lie in the root of the problems that led people to take the streets. Observers and analysts would do well to look beyond the simplistic accounts of the Gezi Park protests.
Posted by lightcapsule at 12:42 PM